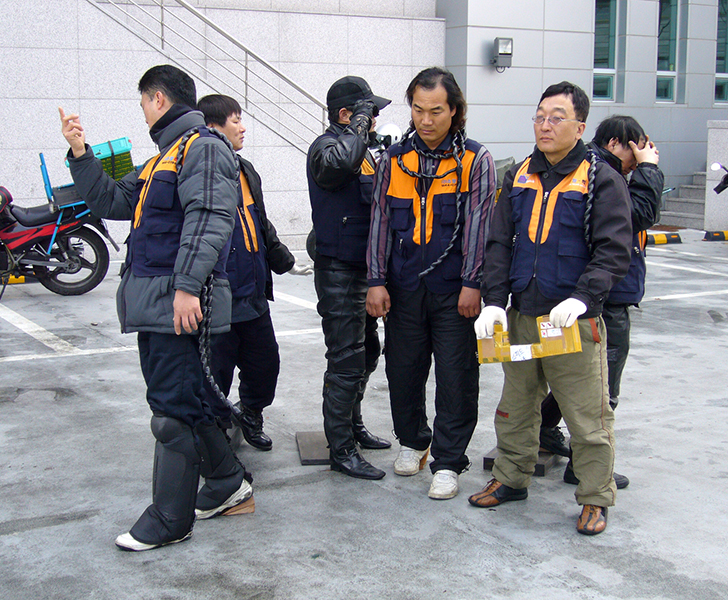 Recast and Reshoot is an exhibition presenting a series of works that take the conventions of art history and traditional narrative as points of departure. Filmed in various museums, the Museum Stills form a series of “living tableaux” in which motionless actors recontextualize pictorial scenes and behaviour inspired by the museum context. Hannah continues the exploration in Recast and Reshoot (Burghers of Seoul) (2007), which actualizes Auguste Rodin’s Les Bourgeois de Calais (1884-1886), staged and acted by motorbike couriers in Seoul, South Korea.

Adad Hannah has been developing his Stills series since the early years of the current decade. In these silent video projections, which combine photography and film and recall nineteenth-century tableaux vivants, actors pose in static compositions as if in photos taken from real life. Swaying bodies and blinking eyelids are the only indications that these pieces are, in fact, videos. This approach to art making gives concrete form to the artist’s reflection on video as a medium, and on what distinguishes it from still photography: movement and duration. The tension between stillness and motion lends a peculiar narrative mood to the images, while the suspended action instills a sense of anticipation. Viewers are drawn all the more intensely to the actors’ surreptitious movements, inducing a state of concentration and observation as they watch for even the slightest variations. Hannah has organized his pieces under various headings: Museum Stills, Family Stills, Architectural Stills, Text Experiments. With Cuba Still (Remake) (2005), he engaged with the process of citation by reinterpreting a publicity shot for an unidentified film. This installation incorporated several tapes projected onto a single screen, integrating separately filmed characters into one original composition. Hannah’s most recent project, Recast and Reshoot (2007), updates Auguste Rodin’s The Burghers of Calais (1884-1886) with several “stills,” each complete with its own cast of actors playing the burghers who sacrificed themselves to save their city. By choosing his models from the different cities that possess casts of this sculpture, the artist explores the notion of citizenship in various cultural contexts.

ADDED TO THE PROGRAM:
TOUR OF THE EXHIBITION WITH MARIE FRASER AND ADAD HANNAH, THURSDAY SEPTEMBER 13, 2007 AT 4 PM. FREE ADMISSION