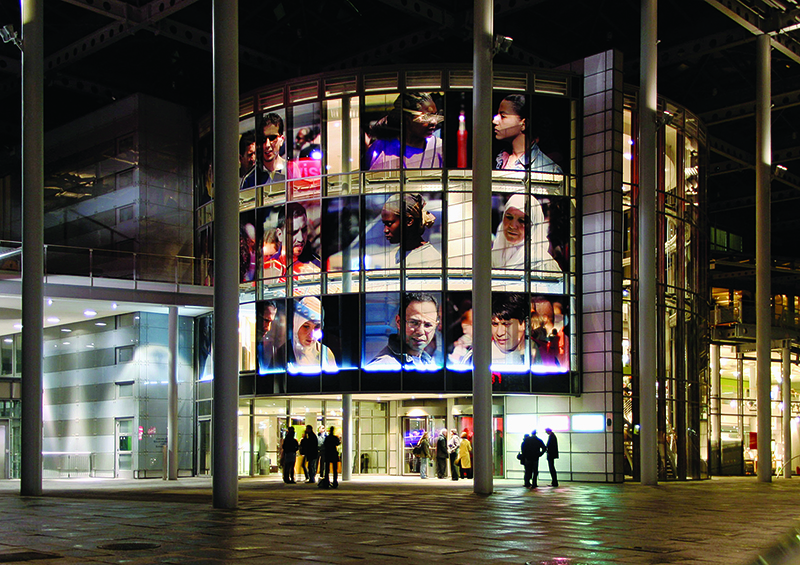 Beat Streuli used a strict shooting protocol to take photographs of unidentified individuals he encoun- tered in the streets. Each picture was taken using a telephoto lens that produces a shallow depth of field and softens the background. Streuli’s projects call for highly individual exhibition parameters and, more particularly, large editions mounted on glass-walled buildings.

Beat Streuli was born in 1957 in Altdorf, Switzerland.
He lives and works in Brussels, Belgium; Zurich, Switzerland; and Düsseldorf, Germany.
www.beatstreuli.com

Since the early 1990s, Beat Streuli has haunted the territories of the great world metropolises, carefully observing crowds in anonymous transit spaces, bent on capturing individual passers-by as they make their furtive appearance in the public space of the street. From a distance made possible by the use of a telephoto lens, Streuli photographs details of human silhouettes caught in the moment of an impossible encounter between the photographer and his subject. Kept paradoxically at a remove from these singular figures, the artist frames them close up, obtaining poses and expressions marked by sharp contrasts of light and shadow. Through the shooting parameters and the aesthetics characteristic of his series, he explores the possible effects of the diaphanous light associated with the highly colourful patina of his photographs. Stripped of all specific contexts, Streuli’s isolated and particularly expressive snapshots bolster his vision of subjects in their individuality. His photographs, printed on a large scale, are incorporated into slide shows and site-specific installations. His portraits constitute vast sets of images corresponding to each of the cities he has visited, and are inserted once again into the urban landscapes from which they were so meticulously extracted.