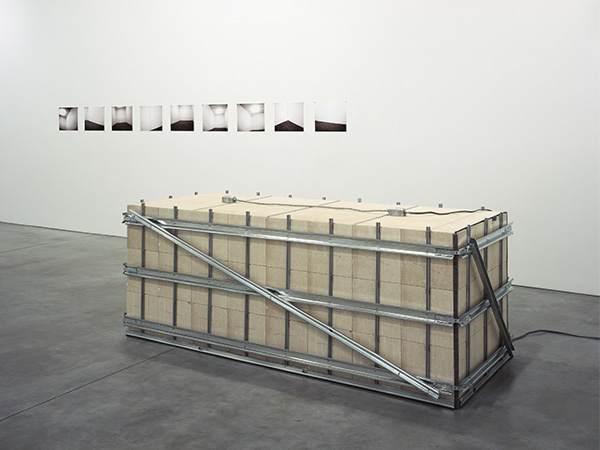 In 1999 Sony introduced a new gadget, the AIBO pet dog. This robot was able to learn, adapt to its home environment, and respond to its owner’s functional and emotional needs. It could emit friendly sounds and take its own photographs. Three years later, in his work Black Box (2002–13), Craig Kalpakjian placed a Sony AIBO robot dog inside a sealed wooden box, not unlike a larger version of a Skinner box used by researchers to study the behaviour of animals in a controlled environment. It is not possible to see into the box, but each day the robot dog takes a photograph of the interior. These photographs are then displayed outside the box on the gallery wall.

Born in 1961 in Huntington, New York, Craig Kalpakjian lives and works in New York. He has a BA in art history from the University of Pennsylvania. His works are included in the collections of the Metropolitan Museum of Art (MET) and the Whitney Museum of American Art in New York, the San Francisco Museum of Modern Art, and the Centre Pompidou in Paris. Major exhibitions featuring his works include After Photoshop: Manipulated Photography in the Digital Age (2012)and Reality Check (2008)at the MET. He has exhibited extensively, including at the Greene Naftali Gallery (1998, 2011), David Zwirner (2010), the Andrea Rosen Gallery (2002, 2004), and the New Museum (2002) in New York, as well as at the Wexner Center for the Arts in Columbus (2005).