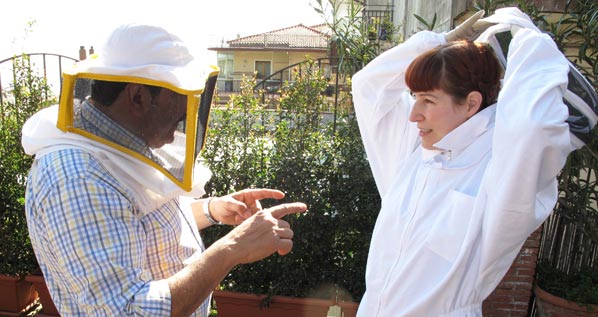 Diane Borsato is known for the eccentric experiments she conducts within her daily life in order to expand her knowledge base. In the exhibition Terrestrial/Celestial, she learns to speak Italian via a lesson on the physics of black holes and an initiation into beekeeping. She invites her mycology club to gather mushrooms in grocery stores in Chinatown. Then she hosts an encounter between these two perspectives (a tour of the edges of the universe and an immersion in the basics of terrestrial life) by organizing an exchange of knowledge between the amateur astronomers and mycologists. In these recent projects, Borsato thus uses her position of artist as a link, the ultimate form of which is her embodiment of a bridge between sky and earth.
Born in 1973 in Toronto, Diane Borsato lives and works in Toronto. Her “eccentric experiments” take the form of private performances or group actions that are supported by her photographs, videos, writings, and drawings. Her works have been featured in solo shows in a number of artist-run centres in Canada and have been presented in exhibitions at the Musée national des beaux-arts du Québec (2003 and 2009), the Ontario Art Gallery (2009), the Vancouver Art Gallery (2010), The Power Plant in Toronto (2008), the Musée d’art contemporain de Val-de-Marne in Paris (2010), and the Stadtgalerie in Kiel, Germany (2011). She is the 2008 winner of the Victor Martyn Lynch-Staunton Award from the Canada Council for the Arts.