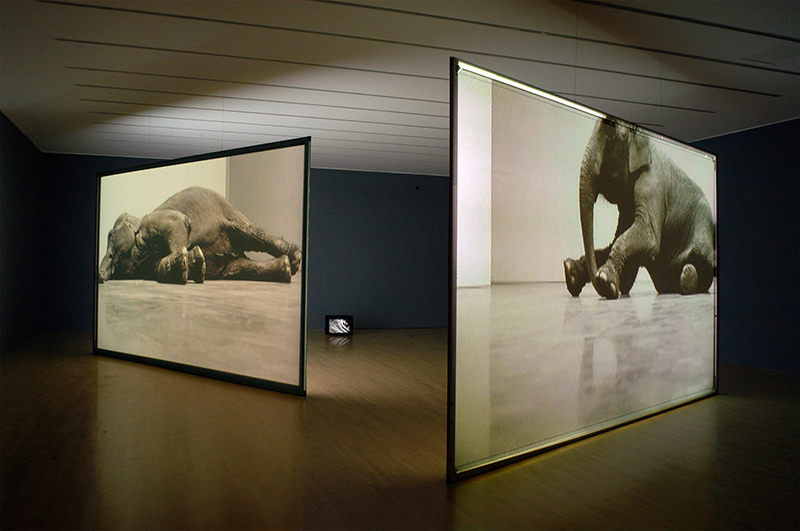 Douglas Gordon is considered one of the most important artists of his generation. Gordon integrates a compelling use of cinema and photography to examine the intersection of memory and imagination. The exquisitely edited silent footage in Play Dead: Real Time (2002) features an elephant, an animal fabled to never forget, performing tricks of playing dead. 5 Year Drive-By (1995) is a compelling and poetic manipulation of duration in the storyline of the film The Searchers, a Western by John Ford. This is the first major exhibition of Douglas Gordon’s work in Montréal.

Since the 1990s, Douglas Gordon has addressed themes of collective memory and pop culture by appropriating and subverting images from television, amateur video and film. His videos and installations deconstruct the stories told in Hollywood classics by modifying screening parameters. In 24 Hour Psycho (1993) and 5 Year Drive-By (1995), Gordon plays with the temporal aspects of cinema, reducing the projection speed of two famous films so that they attain running times of 24 hours and 5 years respectively. The narrative thread dissolves, generating a new reception experience more like the one afforded by photography. Gordon’s approach is epitomized by the divisible nature of the self and the clash of dualities, both in the themes explored and in the structure of his works. Thus he explores inversion and doubling in Between Darkness and Light (after William Blake) (1997), an installation in which two films emblematic of good and evil respectively are projected simultaneously on the same screen. And then there is Déjà-vu (2000), which juxtaposes three out-of-synch projections of the same film. Gordon also uses mirrors to create heightened mises en abîme, or infinite recessions of images, as in Through a Looking Glass (1999). He has also extended his explorations of multiple points of view with his installation Play Dead; Real Time (2003), in which three separate screens show us an elephant playing dead.