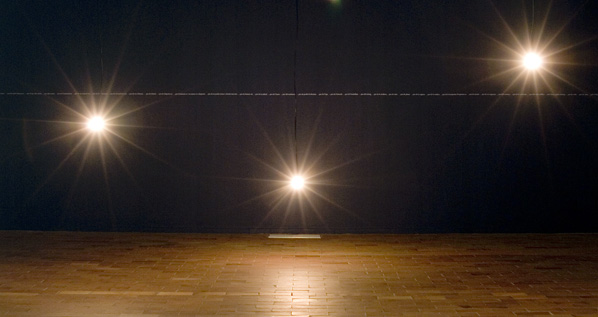 From God to Nothing

From God to Nothing (1996) is an outsized darkroom in which the negative images are projected by thought. On long midnight-blue walls parade a litany of 150 written fears – from the fear of god to the fear of nothing – readable by the glow of three naked light bulbs. Discovered in the darkness, each of these fears generated by the artist’s introspection quickly stimulates, for each viewer, a stunning arborescence of memories, clichés, anxieties, contradictions, catastrophic scenarios, and agonies. This invitation to see the fiction of which our dreads are made and to ward them off to turn them into positive forces reflects Gordon’s penchant for the meanders of memory and psychological processes.

Born in 1966 in Glasgow, Scotland, Douglas Gordon shares his life between Glasgow and Berlin. His multifaceted practice (film, video, text, photography) evidences his concerns linked to the workings of memory, psychological processes, and the construction of identity. His works are collected by prestigious institutions throughout the world, and he has had solo shows at the San Francisco Museum of Art (2007), the National Galleries of Scotland in Edinburgh (2006), the Museum of Modern Art in New York (2006), the Museo de Arte Latinoamericano in Buenos Aires (2007), the Tate Liverpool (2000), and ARC-Musée d’Art Moderne de la Ville de Paris (2000). The winner of an award at the Venice Biennale in 1997, Gordon received the Turner Prize in 1996, the Hugo Boss Prize in 1998, and the Roswitha Haftmann Prize in 2008. He is represented by the Gagosian Gallery in London and New York, the Yvon Lambert Gallery in Paris, the Eva Presenhuber Gallery in Zurich, and the DVIR Gallery in Tel Aviv and Jaffa Port.