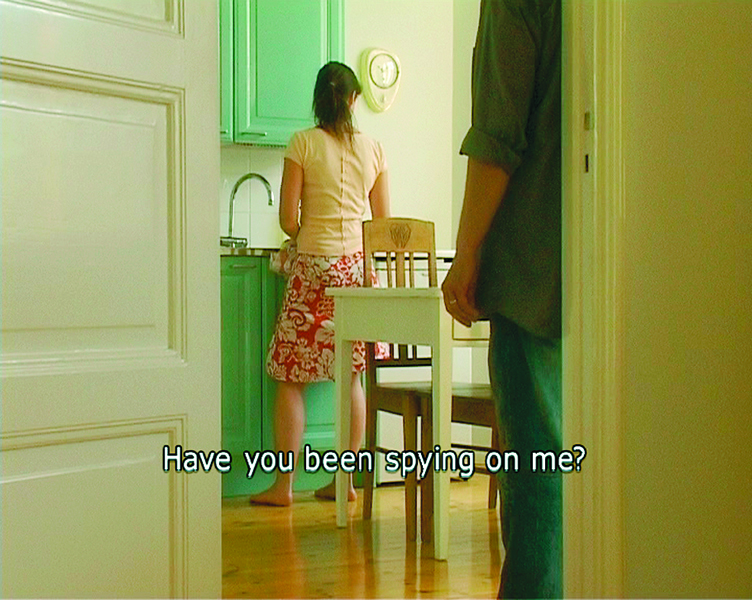 In Kitchen Conversations (2006), emerging artist Elina Saloranta uses a double screen video projection to depict conjecture and temporality in narration. Two simultaneous and parallel images show a dialogue between a woman and a man as they discuss what real love is and a hypothetical progression of the lovers touching. Their conversation about fears, hopes and daydreams is enmeshed with the potentiality of a moment when they literally feel their love.

Elina Saloranta
Born in Helsinki, Finland, in 1968
Lives and works in Helsinki

Elina Saloranta has been producing video artworks since the mid-1990s. The progressive nature of video art is employed to explore the correlation between emotional tension and temporal momentum. As her stories develop, situations change in ways that give rise to numerous possible outcomes. Kitchen Conversations (2006) presents a split-screen projection with two interrelated narratives occurring on each side. On the left-hand screen, a young couple is engaged in an emotionally loaded dialogue about children, parental love and marriage. Meanwhile, on the right side, the same couple is seen embracing for the duration of the video, indicating a hypothetical progression of what might occur between them. Yet, as the video starts, the two characters allude to a previous point in time when they shared an impassioned connection. Thus, the scene on the right could be a recollection of some previous intimacy. In Saloranta’s art, time is treated as a malleable medium that simultaneously transforms, and is transformed by, the narrative it sustains. In Kitchen Conversations, as the dialogue on the left progresses, it is complicated by palpable tension over marriage and children, and ultimately evolves into a form of mutual emotional desire. The influence that emotion has on notions of time is tentatively considered by the viewers and ultimately resolved by the characters in a single exchange that is full of hope and promise: “Lotta would be a nice name,” says the woman. “It would,” the man replies. “But what if it’s a boy?”