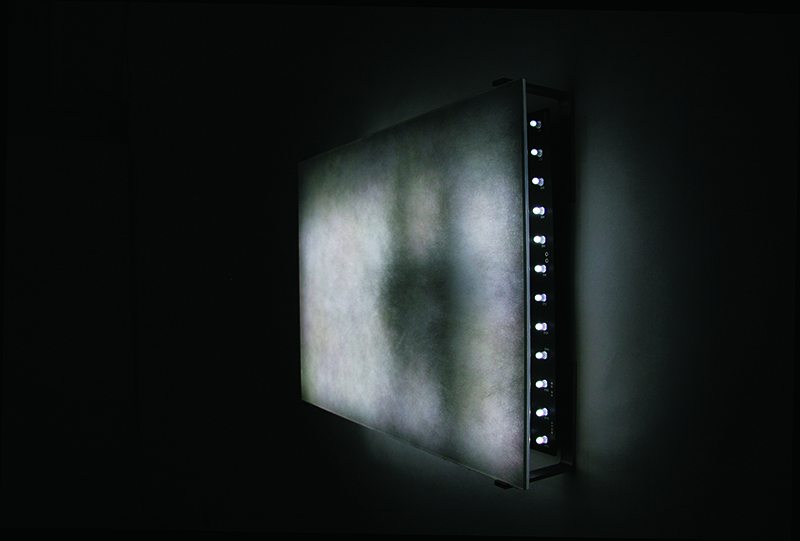 Jim Campbell’s Ambiguous Icons produces a new regime of images that are both still and in motion. Using single points of light arranged in a grid pattern, the artist reproduces a vision of urban landscapes punctuated by fleeting silhouettes. Various translucent filters placed over the light source inter- fere with the legibility of the image. More than photographic records, Bus Stop (2003) and the Street Scenes (2006–08) are animated by kinetic motion and an unstable oscillation between light and shadow, that tends toward abstraction.

Working at the crossroads of photography, video, and new technologies, Jim Campbell has produced a new visual system that combines still and moving images. Since the early 1990s, his work, inaugurated with his first interactive videos — Hallucination (1988–90) and Ruins of Light (1992) — has opened the field of electronic art to active participation by viewers. Campbell’s art is intended to undermine the traditional concept of perception. In his installations Shadow and Untitled (for Heisenberg) (1994–95), vision is made obsolete — even impossible; it is then disrupted through the use of rhythm and colour in the series Memory Works (1994–98) and Color Works (1998–99). In 2001, Campbell began using light panels, electronically manipulating their resolution and speed. In the series Ambiguous Icons (2000–08), he used Plexiglas and resin panels to filter the light given off by a light-emitting diode screen. The resulting pointillist or clouded images stripped vision down to fleeting silhouettes and flattened landscapes in which figures were threatened with extinction at any moment. Preserving only their areas of light and shadow, Campbell altered these simple patterns to the point where they bordered on abstraction. His works draw on the formal possibilities of the photograph — soft focus, sharp contrasts, the capacity to capture still images and suspend time — by paradoxically associating them with duration and motion.

Jim Campbell. Courtesy of the artist.