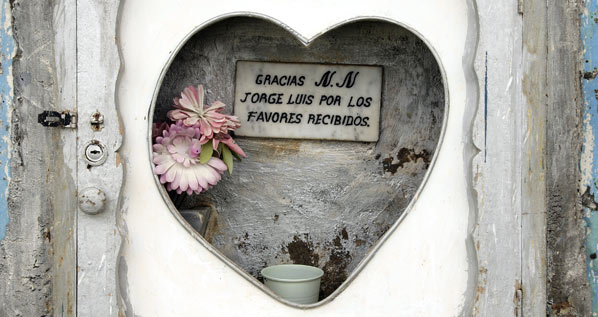 In Colombia, Bocas de Ceniza [Mouths of Ash] is the name of the mouth of the Magdalena River, from which the bodies of the victims of violent conflicts shaking the country are recovered. Requiem NN (2006–2011) bears witness to the compassionate Colombians, who bury these nameless bodies, offer them a remembrance, and in a way, return the identity that has been taken away from them. In Bocas de Ceniza (2003–2004), the macabre river delta becomes the mouth of 7 witnesses who sing a second requiem a cappella: the poignant account of the traumatizing events that they have experienced. As he discreetly passes on these acts of resistance and resiliency, Juan Manuel Echavarría suggests, in the exhibition Requiems, that poetry has the power to transform damage into social cohesion.

Born in 1947 in Medellín, Colombia, Juan Manuel Echavarría shares is life between New York and Bogotá. At first a writer, he turned to video and photography in the 1990s to react to the declining situation in Colombia. Since 1998, his work has been presented throughout the world, including at the Museo de Arte Moderno in Buenos Aires (2000), the Museum of Modern Art in New York (2005), the Venice Biennale (2005), the North Dakota Museum of Art (2005), Jeu de Paume in Paris (2006), FotoFest in Houston (2006), ZKM in Karlsruhe (2010), and the Josée Bienvenu Gallery which represents him in New York (2011).