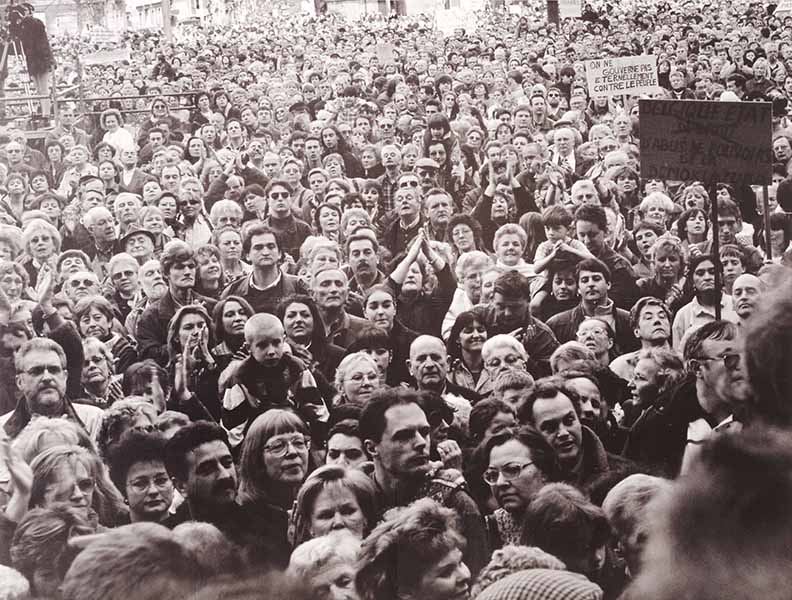 The temptation to deal in mass sensationalism is dealt a blow in Lidwien van de Ven’s images which, although they are related to disturbing news events (Kosovo, political crises, sordid crimes), reject the logic of shock. These oversized images, in the form of adhesive posters, depict decision-makers capable of altering the course of events, if not the interpretation of the past.

Lidwien van de Ven
Born in Hulst, the Netherlands, in 1963. Lives and works in Rotterdam.

Lidwien van de Ven has received many awards including the Charlotte Kohler Prize in 1989, the Amsterdamse Raad voor Kunst Installation Prize in 1990, and the Maria Austria Award for her photographic work in 2001. In 1992, she enjoyed a residency in Berlin after receiving a stipend for the Künstlerhaus Bethanien. Since her first group show at the Galerie Paul Andriesse, Amsterdam, in 1985, she has presented her work there regularly in solo and group shows. Other solo exhibitions of her work have taken place at the Künstlerhaus Bethanien (1993) and the Museum Boijmans van Beuningen (1998). In 2001, MUKHA in Antwerp and the Museum Het Domein in Sittard played host to her seule/la main qui efface/peut écrire. Her work has also been shown in many group exhibitions including Aperto, at the Venice Biennial (1990), and Lifestills, at the Galerie Carousel, Paris, (2002).