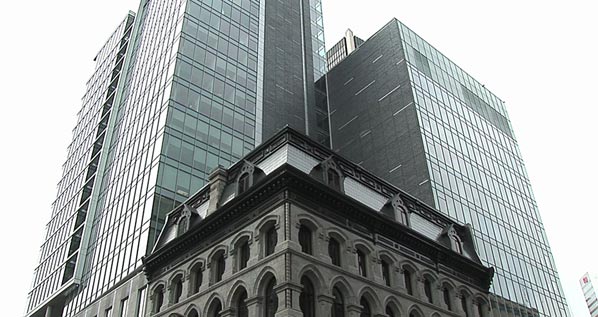 For 30 years, Lisa Steele and Kim Tomczak have been staking a claim for the individual in statistical, media-driven, and demagogic society. In Becoming… (2008–2011), this articulation of the individual body with the social body becomes equivalent for the first time. The cities of Vancouver, Toronto, Montreal, and Berlin – all of the environments that shape individuals – are presented themselves as individualities in transformation; as we witness their development, we conversely embody the society that shapes these urban bodies. Through this never-ending mirror effect, the impassive videographers’ camera formulates nothing less than an existential critique of becoming.

Lisa Steele was born in 1947 in Kansas City, Missouri. Kim Tomczak was born in 1952 in Victoria, British Columbia. They both live and work in Toronto. Steele and Tomczak have worked in collaboration since 1983, producing videos, performances, photographs, and texts concerned with the influence of the social realm and ideologies on individual realities. They have recently had solo exhibitions at the Centre WHARF in Hérouxville- Saint-Clair, France (2010), Akademie Schloss Solitude in Stuttgart (2009), Centre Dazibao in Montreal (2008), and the Canadian Cultural Centre in Paris (2003). Their works have also been in group shows around the world, including at the Museum of Modern Art in New York (1996), the London Institute (2000), Centre Georges Pompidou (2009) and Akbank Sanat in Instanbul (2009). Steele and Tomczak are founders of the Toronto media arts centre V Tape. They have received numerous awards, including a Governor General’s Award in Visual and Media Arts for lifetime achievement in 2005.