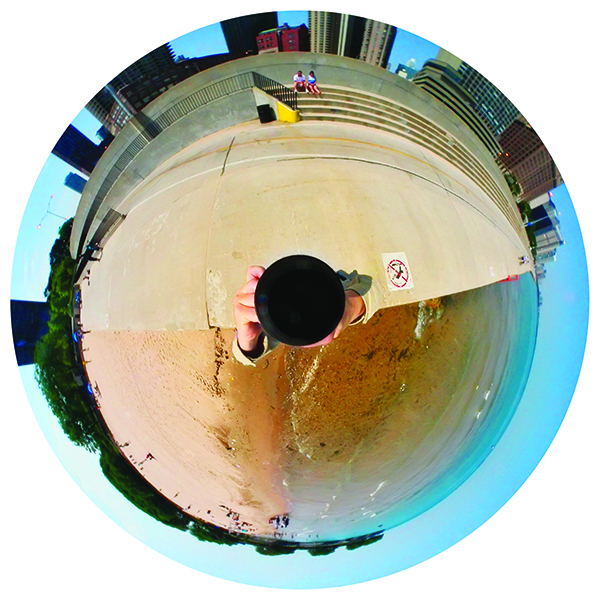 Designed by the artist in the late 1990s, the Panoscope is a picture-taking apparatus that enables him to make panoramic images. Luc Courchesne’s photographic series Journal panoscopique, begun in 1999, is made up of distortions and anamorphoses produced by the lens that was used. The works call for a form of interactivity, with viewers encouraged to activate a small pivoting device placed at the centre of the panoramic circles. The images turn on their axes, prohibiting any one privileged viewpoint. The principle of participation is also central to the artist’s video installations including Venise 07/2005 (2005), with pedestal-mounted screens inviting viewers to walk around the works.

In the 1980s and 1990s, Luc Courchesne was interested in redefining the portrait genre through short fictional videograms (Portrait no 1, 1990). His use of video monitors and multimedia software generated the potential for dialogue between imaginary protagonists and real viewers. In Paysage no 1 (1997), viewers entered a space walled off by screens and were guided by virtual characters. After these first interactive pieces, Courchesne turned to making installations that involved projections onto surfaces not normally used for that purpose, producing new modes of perception for the viewer. Through the use of the Panoscope, a device that he invented in 1999, he abolishes the traditional framing of the photograph. The Panoscope steers the image into three dimensions, in the process producing a totalizing environment. When placed over a camera lens, the panoscopic device enables the artist to create images without a vanishing point. Since coming up with this invention, Courchesne has been keeping a daily journal — his Journal panoscopique — when he travels, patiently recasting the photographic act. He subjects his meticulous collection of images, which are both anecdotal and snapshot-like, to the manipu- lations of optical phenomena handed down from Renaissance painting and nineteenth-century panoramas. With rotating supports and circular images, he deconstructs viewers’ habitual points of reference to the work and produces a perception of virtual vertigo. Without a horizon line, the photograph nudges the gaze toward centrifugal motion.

Luc Courchesne’s devices have been shown regularly in Canada as well as at the Ars Electronica Festival (Linz, 1999), and at the ICC Biennial (Tokyo, 1997). He has also had a solo exhibition at New York’s MoMA (Project 47, 1994).