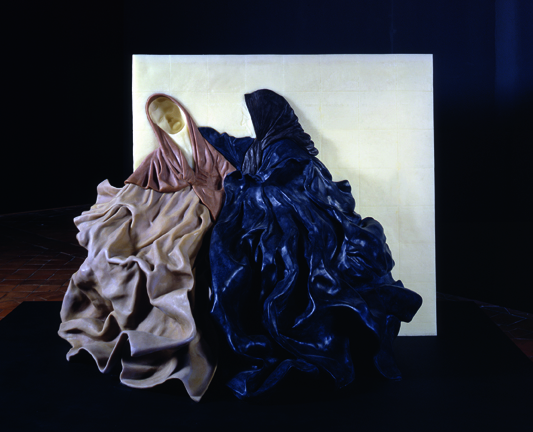 The Madone de Bentalha (2001–02), a monumental wax sculpture by Pascal Convert, reuses in an original and ambitious manner a contemporary photograph that was widely disseminated in the international press and praised by the photojournalism corporation. Convert appropriates a “news icon,” transforming it into a massive perennial work made up of a white wax wall bearing relief contours of the original image. Unlike the rapid and ephemeral consumption of images imposed by the media system, Convert’s sculpted work authorizes duration and contemplation, making it possible to perceive the dramatic issues associated with the scenes represented.

Pascal Convert was born in 1957 in Mont-de-Marsan, France. He lives and works in Biarritz, France.

In his first graphic works and body moulds, Pascal Convert took personal, everyday materials — his apartment, his arms, ordinary objects — and set out to preserve them in memory. In the early 1990s, however, he abandoned these autobiographical traces and turned his attention toward collective history and some of the figures that it has buried or forgotten, such as the Resistance fighter Joseph Epstein (Lettre au fils, 2007) and the murdered Russian journalist Anna Politkovskaya (Tombe pour Anna Politovskaïa, 2007). While Convert has produced documentary-style audiovisual works, the technique of imprinting constitutes the foundational process of his work. He has created relief sculptures and worked with the quintessentially tra ditional materials of wax, crystal, and stained glass (Abbey of Saint-Gildas-des-Bois, France, 2009).The triptych Lamento (1998–2005) reproduces, in the volume and weight of wax sculpture, the Christian iconography of the mater dolorosa, the aesthetics of which Convert found full blown in three news photographs. By nudging archival images and contemporary press pictures toward the sphere of art, Convert has made the transition from one image system to another and imbued with permanence photographs that would otherwise have slipped from view after making the front page for a day or two. He questions the accuracy and critical dispari- ties — ranging from total absence to media overexposure — of images in the face of events. By stopping to study these figures, the artist rescues them from their quotidian temporality.

Pascal Convert completed a residency at the Villa Medici in 1990 and has participated in numerous exhibitions in France (Sharing Exocitisms, Lyon Biennale, 2000; L’Empreinte, Centre Georges-Pompidou, Paris, 1997). In 2007, the series Lamento was also presented at the Mudam in Luxembourg.

NOTE FOR THE MEDIA: DUE TO LICENSING RESTRICTIONS IMPOSED BY SODRAC, THE TAKING OF PHOTOGRAPHS AND VIDEO OF THE WORK IS STRICTLY FORBIDDEN. HOWEVER, A DIGITAL IMAGE OF THE INSTALLATION IS AVAILABLE FOR REPRODUCTION UPON REQUEST.