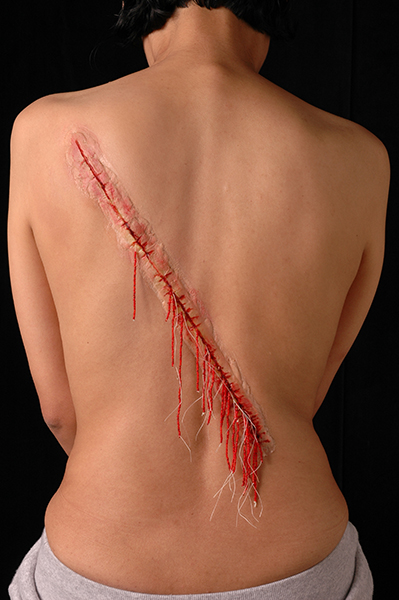 Rebecca Belmore’s work often addresses history, memory and justice. Based in performance, her installations, videos and photographs are renowned for their ephemeral quality and reference to ritual. Her work challenges the subjugation of aboriginal cosmologies and the oppressive forms of disempowerment associated with colonialism and land loss. Rebecca Belmore’s billboard intervention for PLAN LARGE illustrates how public history and notions of self and society are shaped by mass communications.

Presented work: Still in production. Work title will be confirmed.

Rebecca Belmore works in diverse artistic media to create meditations on the embodiment of knowledge, the act of storytelling, the transmission of language, the earth as a living entity, and social justice. In her pieces, narrative is often approached as a reference to the echo of collective memory that resonates in and through us, influencing who we are and who we will become. The body, a central element in many of Belmore’s works, acts as an artistic cipher through which she articulates the social, political and emotional dynamics that make us human. By incorporating public interaction as a constructive process into many of her early works, Belmore has encouraged people to make their voices heard – and with them, their vision.As with the sculpture/performance Ayumee-awaatch Oomamamowan (1991), a huge wooden megaphone allows people to speak to the earth directly about indigenous peoples’ rights and their ongoing land claims. Hearing their voices amplified over the land one recognizes, at an emotional level, the relationship between their actions and the Earth. As in other performances, such as For Dudley (1997) and Vigil (2002), Belmore’s work remains relevant to the resistance movements of her Anishinabekwe community and those of other First Nations peoples. At the same time, Belmore maintains an innovative approach to her practice that subverts stereotyped and limited classifications of First Nations art forms. Her artistic versatility and communicative abilities are evident in her sculpture installation Reservoir (2001); in her photographic work State of Grace (2002); and in her powerfully symbolic video Fountain (2005).