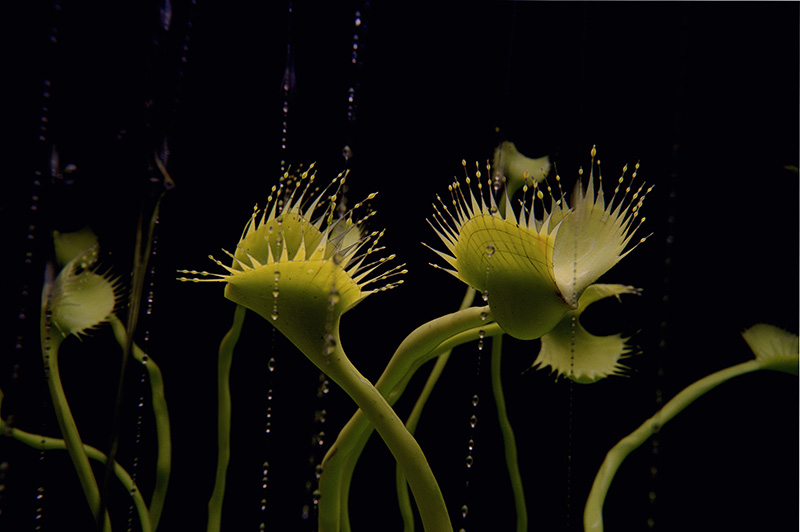 Saskia Olde Wolbers often takes the inspiration for her stories from actual news articles, television documentaries, and urban legends. In Trailer (2005), narration of fictional stories in the style of media reportage of real events provides the sound track, while the visual focus alternates between the maroon-coloured interior of a cinema and an extraordinarily lush jungle. In fact these are intricately handcrafted sets, manipulated in a way that redefines boundaries between film, sculpture, installation and painting.

Saskia Olde Wolbers’ narrative videos draw us into unknow worlds between the imaginary and a dream-state. Based on real events, newspaper stories and documentary films, her chronicles are replete with holes, lacunae and missing bits of information – precisely the gaps in which her imagination flourishes. Using neither action nor dialogue but a highly evocative combination of off-screen voices and bizarre images that are closer to dreams than to reality,Wolbers takes us directly into the inner lives of characters that we will never see again. In all of these works, a protagonist is thrust into a miniature world, an entirely personal yet elusive space that holds the secret to his or her existence. Wolbers’ images are all based on prior constructions; she shoots miniature “film sets” submerged in liquids that lend the image a floating quality. Trailer (2005), for instance, begins in the Amazon jungle and shifts to the deep-red interior of a movie theatre. As a promising young artist in London, Wolbers won the ACAVA First Base Studio Award in 1997. After her first solo exhibition in 1998, she would go on to earn several more prizes, including the Netherlands’ Charlotte Köhler Prijs and Beck’s Futures Prize. Wolbers published her first book, Now That Part of Me Has Become Fiction,with Artimo, in 2003.