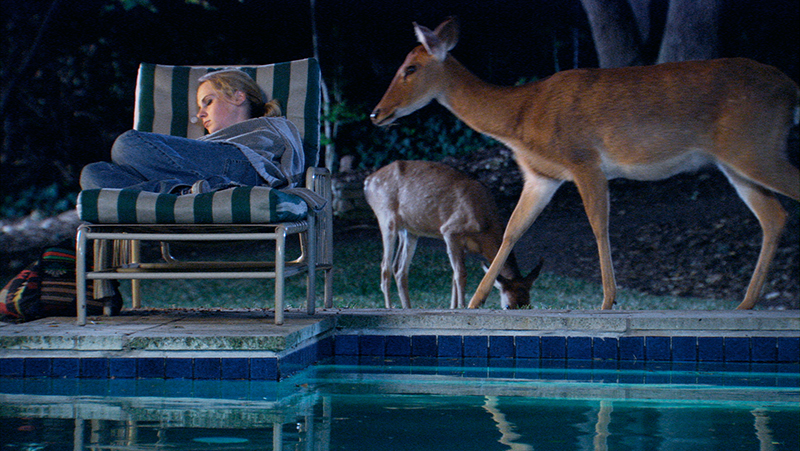 With their staged photographs and their installation-films, Teresa Hubbard and Alexander Birchler appropriate a cinematic vocabulary to construct narratives that no longer conform to film industry standards. House with Pool (2004) explores the narrative possibilities of a non- linear, repetitive and endless story as it undergoes a looped circuit that foils our expectations. In the same spirit, Night Shift (2005), which occurs in a police car, provides a completely different take on a film cliché.

Since the 1990s, Teresa Hubbard and Alexander Birchler have been producing tapes, sculptures and photographs that investigate the spatiotemporal construction of narrative forms. Their pieces feature enigmatic narratives bereft of context or conclusion. By capturing innocuous moments and blocking the linear flow of stories, the artists generate a distancing effect and open their works up to multiple interpretations that place the viewer in a vulnerable position.Their tapes appropriate film language and use bona fide scripts, reflecting their earliest photographs, which focused on creating a type of reality out of the imagination. Night Shift (2005– 2006), for example, consists of four short scenes, each shot at night and beginning with a police officer bringing a coffee to a waiting colleague in a police cruiser. The artists’ videotape examines notions of sleep and insomnia, as well as issues of control, memory, humour and loss. House with Pool (2004), meanwhile, tells a disturbing and mysterious story. The scenario is built around the blurred borders between the interior and exterior of a house,while the ambiguous story involves a gardener, a teenage girl and a woman. There seem to be parallels between the actions of the two female characters, though the connection between them proves to be ambivalent. A composition played on the piano by both women in turn heightens the mystery of the initial scenario.