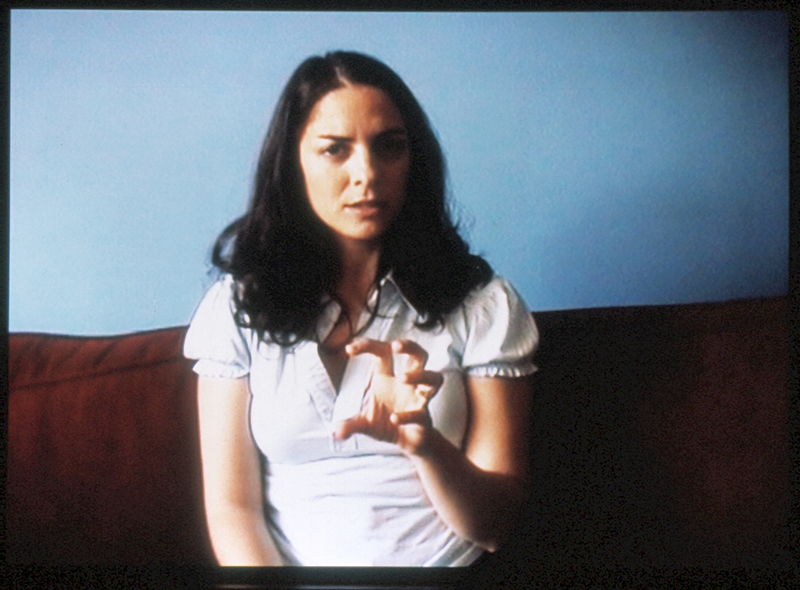 Valérie Mréjen
Born in Paris, France, in 1969
Lives and works in Paris

Since the mid-1990s,Valérie Mréjen has been exploring language and its fault lines using stories taken from daily life; these encompass misunderstandings, childhood memories, and cruel or comical details of existence. Mréjen’s videos, which take the form of brief playlets, feature individuals within a fixed frame, usually seated on a bare set. Composed of colloquial expressions, their dialogues or monologues are delivered in a neutral tone (often by non-professional actors) and evoke the banal and the dramatic as well as the absurd and the cruel. Mréjen thus undermines the limits of communication and gives a different view of human relations. In her series Portraits filmés (2002–2003), she asks friends to relate memories which, told in a detached way, seem paradoxically more fictional than real. Chamonix (2002) presents actors playing short scenes written by the artist. These amusing but disconcerting stories highlight the difficulties of daily communication. In Dieu (2004), Mréjen assembles testimonials by Israelis who, in recounting the personal transformations involved in the shift from radical Judaism to lay life, expose the social and family upheavals they faced. In Manufrance (2005), Mréjen reveals one woman’s daily activities using photographs from the Manufrance catalogue of the 1970s. The images,which follow each other like the plates in a photographic novel, take on a dramatic tone as a neutral off-screen voice lists off domestic and leisure activities.