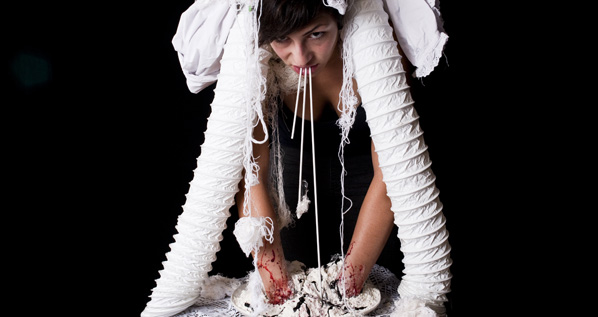 Augustin Rebetez’s chaotic and fertile universe mixes documentary photography, mise en scène photography, animated film, DIY, drawing, and text. With his own unbridled creativity, he paradoxically seeks to convey the inhibited creativity of individuals within a society in which dreams, accomplishments, and even art are formatted by the all-powerful logic of the market. Repressed, this vital creative energy is converted into a rage that rumbles below the smooth appearance of the world, as shown in the visceral images of tout ce qui a le visage de la colère et n’élève pas la voix [all that has the face of anger and doesn’t raise its voice] (2010). The video manivelle [crank] (2010), in which a character loses control of his head to an evil monkey, is another expression of the inner conflict that many people experience nowadays.

Born in 1986 in Delémont, Switzerland, Augustin Rebetez lives and works in Mervelier (Switzerland). He has had ten solo shows in Switzerland, including at the Musée de l’Élysée in Lausanne (2009), which also toured his work in the group show reGeneration 2 (France, South Africa, China, Italy, United States, Hungary, 2010–2011). Rebetez’s works have also appeared at Photo Phnom Penh in Cambodia (2009), the Photoforum in Bienne, Switzerland (2009), and the Rencontres d’Arles (2011).