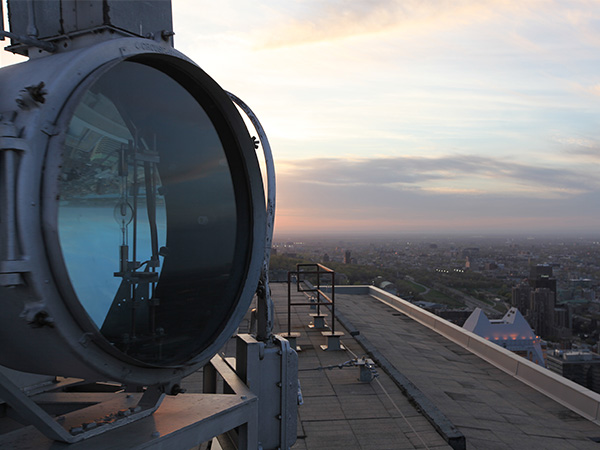 The famous light beacon located on the roof of Place Ville Marie in Montreal starts its rotating performance every day at sunset. David K. Ross’s film Le Phare (2012) is a portrait of this fully automated beacon with its four beams. The film was made by attaching the camera to the revolving unit to follow the trajectory of bright rays illuminating the Montreal sky. Ross provides an opportunity to view this landmark in detail and to observe what it “sees.”

Born in 1966 in Weston, Ontario, David K. Ross lives and works in Montreal and Chicago. He received an MA in architecture from the University of Toronto and a BA from the University of Waterloo. Recently, his works have been in solo and group exhibitions at the Musée d’art contemporain de Montréal (MACM) (2008, 2010, 2012–16), the National Gallery of Canada (NGC) in Ottawa (2012), and the Musée des beaux-arts de Sherbrooke (2012). His works are included in the collections of the Musée National des Beaux-Arts du Québec, the MACM, the NGC, and the Canadian Centre for Architecture. Ross has received numerous grants and fellowships, among them from the Canada Council for the Arts (2009, 2012), the National Film Board of Canada (2010, 2011, 2012), and Arts Council England (2005).