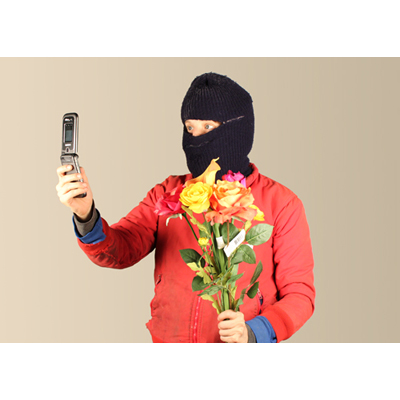 Beyond the realms of chemistry, Dina Kelberman has invented a particular type of chain reaction, as evidenced in her online project I’m Google (started in 2011): images call to other images in a sequence governed by morphological and semantic affinities that generate a gradual, relentless, never-ending flow.

The nineteenth century brought the compulsive need to stockpile images as a way to control the world – a need attested to by the albums of criminologists such as Alphonse Bertillon and Cesare Lombroso. In the twentieth century, an attempt to understand culture and human experience was added to this compilation obsession, which has been evoked, for instance, in Aby Warburg’s Mnemosyne Atlas (1924–29) and Gerhard Richter’s Atlas Micromega (1962–2013), and – elsewhere on the spectrum – through Walter Benjamin’s Arcades Project (1927–40) and Andrei Tarkovsky’s Mirror (1975). This continuous thread of dialectical images – that is, images engaged in a dialogue with other images – leads us to Kelberman in the twenty-first century. Beyond speaking, it is a matter of showing: the underlying discourse lies in the infinity of images.

Viewers have sometime wrongly assumed that I’m Google simply operates with an automated program, “a bot set free on Google Image Search and directed to Tumblr, rather than the selective record of countless hours of looking and sifting. . . . Kelberman’s work exploits a strain in Internet art” that, according to Teju Cole, “challenges the viewer to assume it was made by a bot, not an artist: a kind of reverse Turing test.”

Among the series of works gathered under the generic umbrella of Torrent, Le Mois de la Photo à Montréal presents two similarly oriented projects: Doors (started in 2012) and Go Outside (2015).

Dina Kelberman was born in 1979 in Annapolis; she lives and works in Baltimore. She holds a bachelor’s degree in fine arts from Purchase College in New York (2003). Her works have been presented in solo and group exhibitions at the Marina Abramović Institute in New York (2015), the Biennale Internationale Design Saint-Étienne (2015), the CUE Art Foundation in New York (2014), the Broadcast Posters in Lyon (2014), Night Contact in London (2013), the Furthermore Gallery in Washington, D.C. (2013), the New Museum in New York (2013), the Screengrab New Media Arts Award Exhibition in Australia (2012), the Maryland Film Festival (2012), and the Double Double Land in Toronto (2010), among others. Kelberman was the recipient of the Rhizome Tumblr Internet Art Grant in 2013 and was a finalist for the Screengrab New Media Art Awards in 2012. She was artist in residence for Electric Objects (2014). 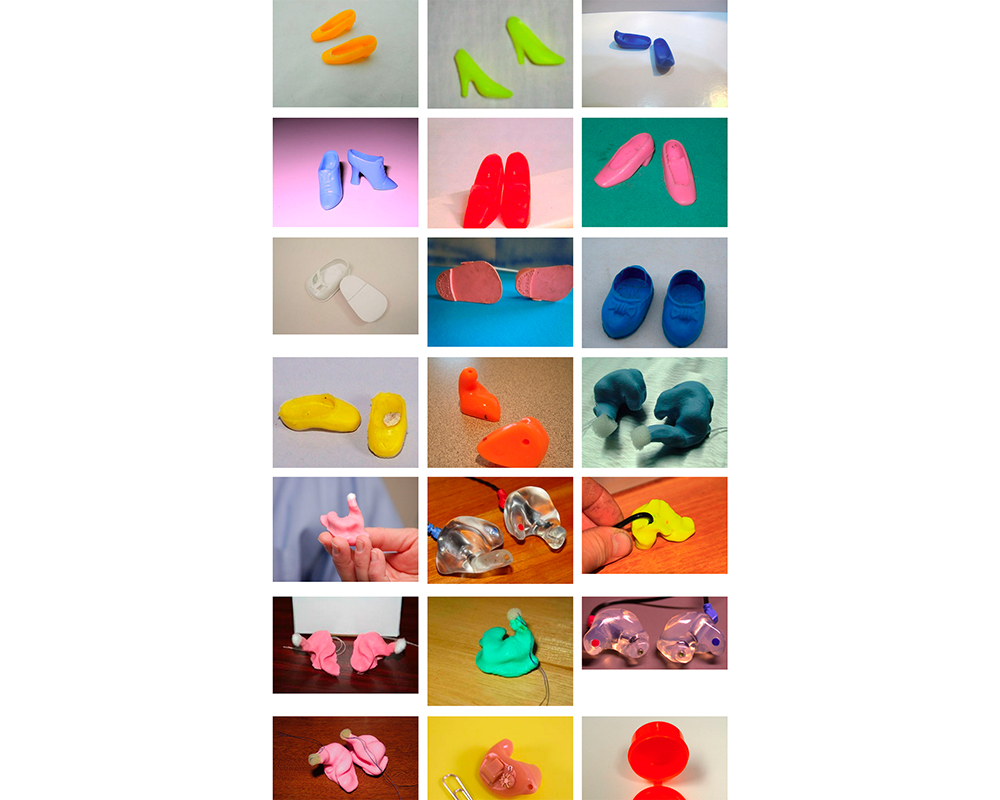 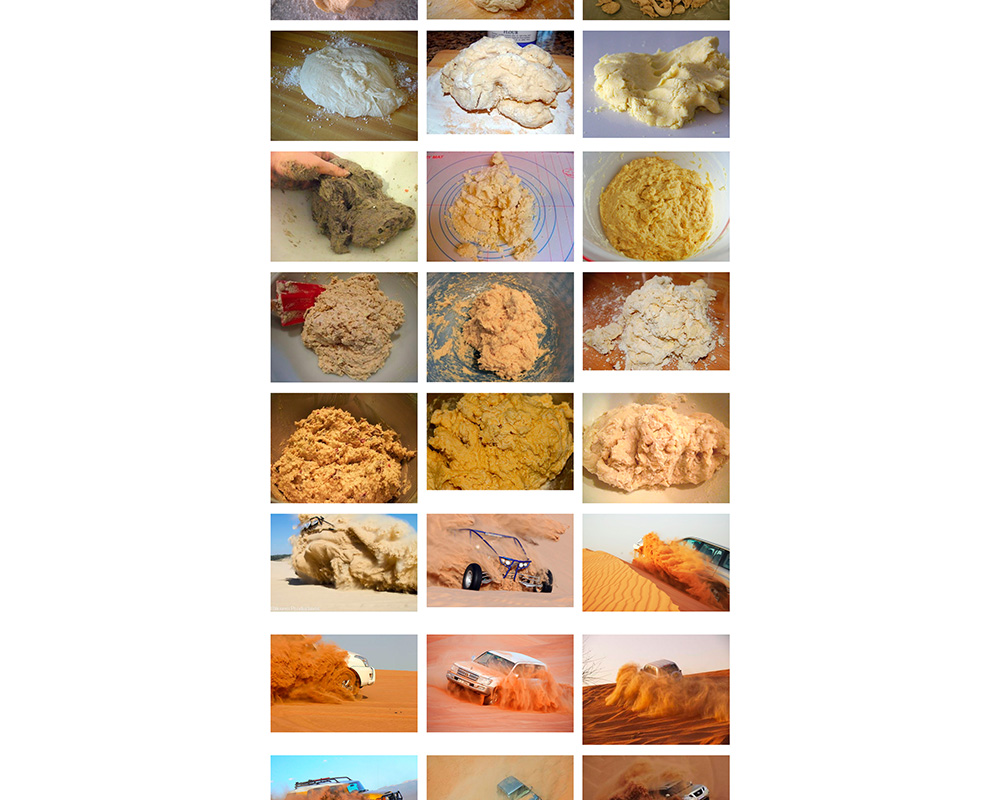 What is your artistic process? What is your starting point for creating a new work of art? What inspires you?

I try to make work as impulsively as possible. I’ve always worked with whatever was at hand, and since I’m now on the computer basically all day every day the things at hand are media and images from the Internet or wherever. I tend to gravitate towards color, and most of my work comes from experimenting with color combinations or manipulation. I like to make things without questioning my whims and then later consider why.

Which artist had the most influence on your practice and why?

Last year a show of mine was reviewed and my piece Smoke & Fire was referred to as “too derivative” of a piece called Every Anvil by Jennifer and Kevin McCoy and when I read that I was like “joke’s on you lady cause I don’t even know what that is!” And then I googled it and realized it was this piece I had randomly seen like 15 years ago in a gallery in Chelsea and I had really loved it and it actually had a profound impact on my ideas about artmaking and was really inspiring to me. So it turned out my work WAS derived from it and she was right!

On a related note, I actually ended up in a two­person show with Jennifer and Kevin McCoy a few years ago (before I had gotten this review and remembered that piece) where I showed Smoke & Fire and met Kevin McCoy, who was super nice and very chatty and weirdly somehow didn’t mention that he had made a very similar work many years earlier...

So to answer your question: Chuck Jones.

Do you work on many projects at the same time?

YES. I am constantly working on tons of things at once. Many of my recent projects are “ongoing” in that they are collection­based works that I can essentially add to infinitely until I decide to stop. So I occasionally update each of those projects (in particular I’m Google, Smoke & Fire, and Thanks Newsletter). I also usually have several projects I’m thinking about that I’m collecting or occasionally working on or trying to figure things out with. I also have a day job as a web designer, which feeds into my work a lot, and I write, do production design, and Internet development for AB Video Solutions, a video production company that my friends operate. I basically always have way too much going on at once, which I am trying to curb because ironically, I think that boredom is the most important creative force there is.

We are evolving in a new visual order governed by the “dictatorship of the screen.” This new visual order is marked above all by three factors: the immateriality and transmissibility of images; their profusion and availability; and their decisive contribution to the encyclopaedifying of knowledge and communication.

How is dissemination and circulation of images important in your work?

What is your relationship to the Internet in relation to your artistic practice?

I’m really obsessed with finding images and videos on the Internet and trying to understand why they exist, and understand (or fail to understand) why whoever made them did it the way they did. The Internet makes this process effectively infinite, because there’s so much content to find. Every time I find something completely unthinkable it turns out there’s a whole culture of people into it and that is also obviously amazing to think about. It makes me so happy to see people finding joy in things that I would never even conceive of or never pay attention to, and I love seeing those people supporting each other and finding relationships that wouldn’t have been possible without the Internet. Everybody has amazing idiosyncratic impulses and on the Internet you can find people following through with them and finding the perfect happiness that comes from that, and that’s how I try to make art and something I want all people to experience.

Why do you use found images?

I work impulsively with what is at hand, and when you are staring at a computer all day every day, what is at hand is the media that you come across. I have always collected found images that I just thought were beautiful, hoarding runs in my family.

How do you reinterpret and give a new meaning to found images?

I don’t really think about this when I’m doing it, I work with purely aesthetic concerns in the moment and think about the results later. Combining images naturally changes the whole, whether just through the effect of multiples, figure/field relationships, context meanings, optics, etc. I try to be a silent partner in my work, I find that people bring their own meanings to things and I don’t want to stand in the way of that.

Questions related to her work

How do you select the images or videos that become the basis of your work in I’m Google?

I have a huge collection of folders of images on my computer that I save to hopefully incorporate later. I collect those from natural Internet wandering. Other times, when I’m specifically “working” on I’m Google, I concentrate more on trying to make the next transition so the searching is more specific. That always results in me finding unrelated stuff too, which gets added to the saved folders. Collecting images and videos this way is something I’ve always done, which is why I started putting them on the blog in the first place.

The title I’m Google is provocative. What does this title mean for you?

I thought it would be a funny title about how much I use Google Image search.

In I’m Google is the choice of images you put in your work as important as re-circulating them?

I don’t understand this question? The choice of images is the only important part.