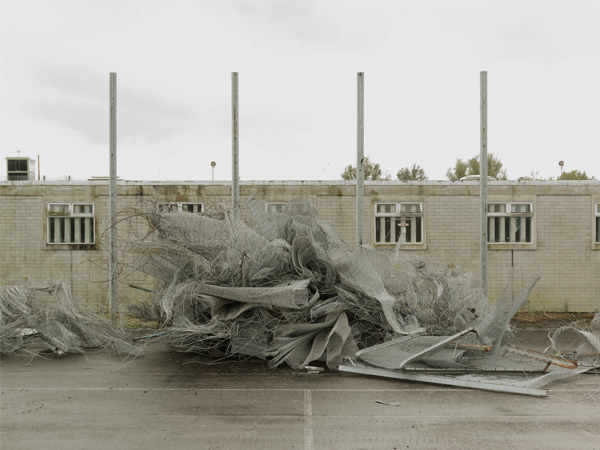 PRISON HOUSING: DONOVAN WYLIE
The Maze prison in Northern Ireland opened in 1971 to detain paramilitary prisoners during the Troubles, and closed 29 years later, after the Good Friday Agreement. With the “dirty protest,” hunger strikes, and escape attempts, the prison played a prominent role during this difficult period. But it was the prison’s architectural element, the H-block buildings, that became the symbol of the Maze and of the protests. Donovan Wylie’s photographic survey The Maze (2003–09) focuses on the different layers of imprisonment: the cells in the H-blocks, the various forms of fencing, and finally the perimeter walls. He reveals the vacant cells and interlocking fencing that confined prisoners within a machine of control.

Donovan Wylie was born in 1971 in Belfast, Northern Ireland. In 1998, at the age of 27, he became a full member of the Magnum Photos agency. In 2011 Wylie was awarded the Bradford Fellowship in Photography and in 2010 he was shortlisted for the Deutsche Börse Photography Prize. He has had solo exhibitions at the Imperial War Museum in London (2013); the Royal Ontario Museum in Toronto (2011); the National Media Museum in Bradford, U.K. (2010); the Irish Museum of Modern Art (IMMA) in Dublin (2006); and The Photographers’ Gallery in London (2005). His works are in major public collections, including IMMA, the Victoria and Albert Museum in London, and the Centre Pompidou in Paris. Wylie is represented by Magnum Photos.

SOCIAL HOUSING: ILSE BING
Photographs from the CCA collection, 1930
In collaboration with the CCA

The 35 mm still camera fundamentally changed how we view the world. Small and portable, it was made to be hand-held and placed at eye level. In 1929, the young German photographer Ilse Bing bought a Leica and started a photographic career that took her from Frankfurt to Paris and on to New York. While Bing was in Frankfurt, the architect and urban planner Mart Stam commissioned her to undertake a photographic survey of the Henry and Emma Budge-Heim project, a social housing H-block building designed for elderly people. Bing started with an exterior overall view of the building and then records the interior corridors and rooms. This gives the impression of a visual narrative that moves with dexterity from outside to inside the building, advancing closer to objects, and taking a microscopic view of the smallest details within the recently constructed building.

Donovan Wylie, Fence. Deconstruction of Maze Prison. Maze Prison. Northern Ireland, 2009, from the series The Maze. Courtesy of the artist

Ilse Bing. View of the glass partitions on the balconies of the Budge Foundation Old People's Home, Frankfurt am Main, Germany, 1930. Collection CCA. Courtesy of the CCA © Estate Ilse Bing