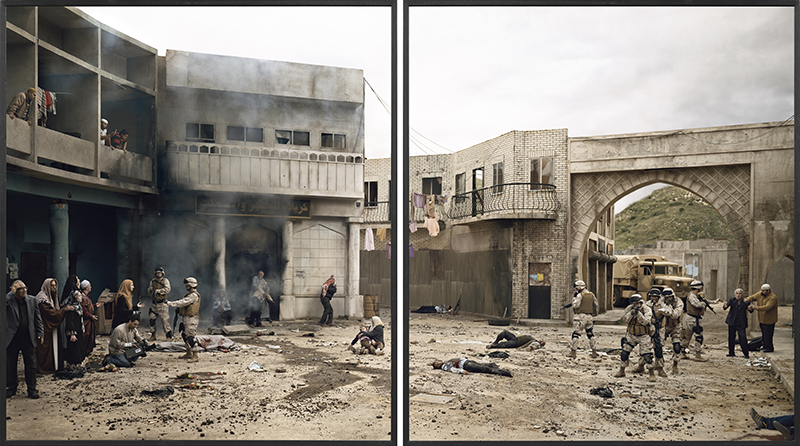 Éric Baudelaire’s photographs are intricate and interwoven stagings of reality that deal with war-like situations and notions of territory. Imagined States (2003-2005) presents nearly thirty photographs produced in Abkhazia, a nation in an irremediable state of decomposition that has declared its independence but exists solely by virtue of its people’s will and imagination. The diptych The Dreadful Details (2006), which reconstructs an Iraqi war scene in a movie studio, offers a singular reflection on the iconography of war in the history of art and photography.

Over the past decade, Éric Baudelaire’s photographic practice has taken a critical look at issues of politics and identity. In mises-en- scène that interweave reality and fiction, his images deal with warlike situations that highlight his interest in the notion of territory. Imagined States (2003–2005) comprises some 30 photographs made in Abkhazia, a state that proclaimed its independence from Georgia in 1993 but is still not recognized by the international community. This “imagined state,” which exists only through the will of its people, is presented as a dreamlike world set down among real landscapes whose poetic melancholy conveys abandonment and decrepitude. Baudelaire creates suspended fictions, worlds awaiting development that relate the quest for a national identity to be built but apparently in irremediable decomposition. His recent diptych, The Dreadful Details (2006), reconstructs an Iraqi war scene on a Hollywood movie lot. Beyond its depiction of the current conflict in the Middle East, this work is a reflection on the ways in which war is portrayed in the history of art and photography. Using extras, the artist revisits the classic figures of the genre, inspired as much by Goya as by Alexander Gardner, Timothy O’Sullivan, Don McCullin and the pictures from Abu Ghraib. Assembling the stereotypes of war imagery in a single work, this contemporary post-historical tableau deconstructs narrative and temporal unity by juxtaposing multiple scenes. Baudelaire is using the photojournalism aesthetic to remind us of the fabricated nature of “documentary” works.