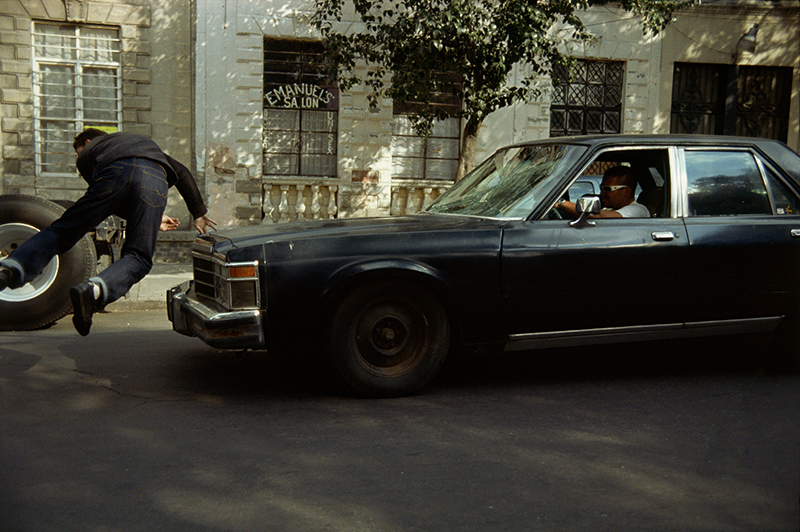 Gustavo Artigas plays with recurrent themes such as the structure of socio-political games, the element of surprise, improvisation as well as a sense of disaster in contemporary society. Unpredictable consequences and ironic twists on the notion of “high art” are central motivations for his performance and visual art. The photographs of shocking moments of death in Tres Tiempos (2007) generate reflections on mortality and coincidental circumstance.

Intrinsically linked to the sociopolitical context in which these performances occur, Gustavo Artigas’ artistic productions find their roots outside art institutions. By involving people from all walks of life – previous pieces have featured athletes, comedians, prostitutes, curators, designers and stuntmen – Artigas produces art works that speak of, and are anchored in, specific cultural realities. With the artist as their guide, participants find themselves in sometimes unexpected situations in which they must negotiate cultural, political, or physical tensions. In Rules of the Game (2000-2001), Artigas employed sports fields as a terrain for negotiating cultural, political and economical issues. In the two stages that constituted this project, city dwellers had to mediate the politically charged space of an outdoor handball court that the artist built along the USA-Mexico border in Tijuana; and two Mexican soccer teams, along with two American basketball teams, had to referee the limited space of a single field on which they all played simultaneously. The rules of this game transformed a simple cross-border sporting event into artistic commentary on international relations between Mexico and the United States. In a later work, Tres Tiempos (2007), Artigas, with the help of a stuntman, recreated a pedestrian accident over three consecutive days in a city centre, photographing each installment in nine successive frames. In both these works, Artigas points towards a brief period of time during which individuals have to react to their living environment in an unexpected manner. As those moments unfold, a tension-filled narrative invariably surprises viewers.