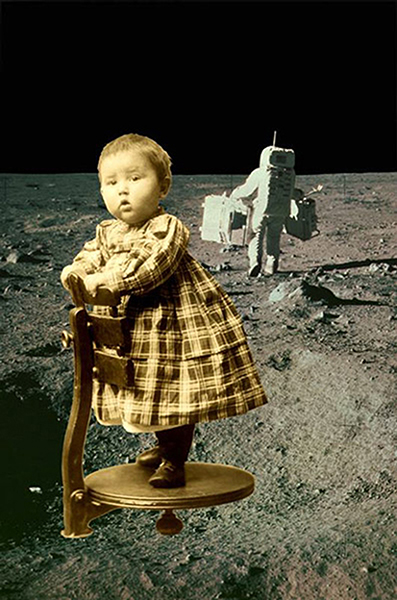 In the photographic series, Portraits Against Amnesia, Hulleah Tsinhnahjinnie transforms ten studio portraits of Native Americans − some selected from her own family archive, others purchased on e-Bay. As curator Rhonda L. Meier explains, “the photographs selected and manipulated by Tsinhnahjinnie are evidence of the cultural dynamism and agency of their subjects. Most were studio portraits commissioned by the sitters and transformed into postcards. Tsinhnahjinnie has enlarged the images of this inherently ephemeral, intimately scaled medium to ensure that each portrait has a more permanent, monumental presence. Most are also brought into an indeterminate present/future through the digital alteration of their background. Thus recontextualized, each portrait is given new and multiple levels of meaning.” Complementing this series is a continuous video projection, An Aboriginal World View with Aboriginal Dreams, made in 2002, in collaboration with performance artist Leilani Chan. The video draws a parallel between the American invasion of Iraq and the European theft of Indian territory that founded the modern American nations.

Hulleah J. Tsinhnahjinnie (Seminole/Muscogee/Diné) was born in Phoenix, Arizona, in 1954. She attended the Institute of American Indian Art in Santa Fe, New Mexico, in 1975, before entering the California College of Arts and Crafts in Oakland in 1978, where she received a BFA in painting, with a minor in photography. In 2002 she completed her MFA at the University of California, Irvine, focusing her studio work on digital videography. Tsinhnahjinnie is currently at the University of California Davis, where she is director of the C.N. Gorman Museum and an assistant professor in the Native American Studies Department.

Hulleah J. Tsinhnahjinnie, from the series Portraits Against Amnesia (2003). Courtesy of the artist