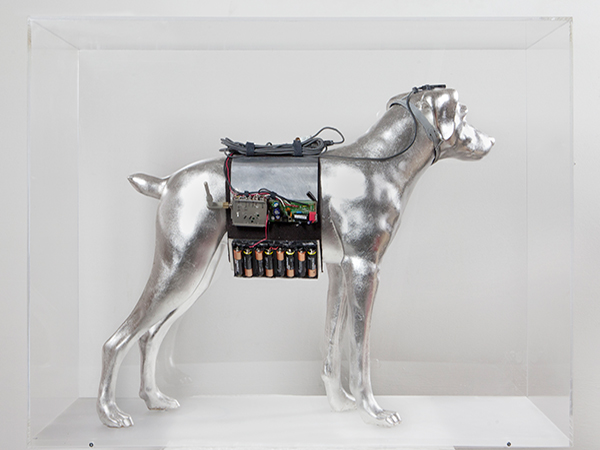 Many of Jana Sterbak’s artworks revolve around the themes of power, control, and the use of technology to transcend the limits of the human body. For her video installation From Here To There (2003), Stanley, a Jack Russell terrier, was set free to roam the Canadian landscape with a camera mounted on his back. Stanley’s vision, based on his size and movement, might seem unstable and jerky, but it directly questions the human view of the world, which is seen to be permanent and steady. This work is an investigation of the relationship between animals and technology grounded on a range of senses that are “natural” and “mechanical.”

Born in 1955 in Prague, Jana Sterbak moved to Canada in 1968, and she now lives and works in Montreal. In the past 20 years, she has had solo and group exhibitions in major museums, including the Musée d’art contemporain de Montréal (2011, 2012), the National Gallery of Canada (NGC) in Ottawa (2008, 2012), the Centre Pompidou in Paris (2009–10), the Museum of Modern Art in New York (1992), as well as at the Venice Biennale (2003). Her solo exhibition Jana Sterbak: States of Being, organized by the NGC, toured North America in 1991–92. She has received important awards, including the Governor General’s Award in Visual and Media Arts in 2012 and the Chalmers Award from the Ontario Arts Council in 2000. Sterbak is represented by Galleria Raffaella Cortese in Milan, Barbara Gross Galerie in Munich, and Galerie Laroche/Joncas in Montreal.