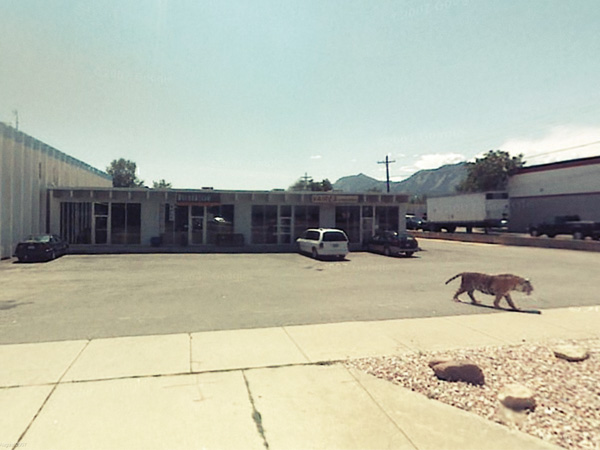 Jon Rafman belongs to a small group of artists who base their work on the large Google Street View archive and image repository. The title of his series, The Nine Eyes of Google Street View (2008–ongoing), makes direct reference to the nine cameras mounted on each hybrid electric car sent by Google Maps to chart the world. Rafman selects images of weird events captured by the seemingly impartial automatic camera while on the road. The results thus generated are bewildering photographs that question any rational understanding of the world. As also seen in his video You, the World and I (2011), the everyday becomes mysterious, disorienting, and very strange.

Jon Rafman was born in 1981 in Montreal, where he continues to live and to work as a filmmaker and artist. After receiving a BA in philosophy and literature at McGill University in 2004, he obtained an MFA at the School of the Art Institute of Chicago in 2008. His works have been featured in exhibitions worldwide, including at the Contact Photo Festival (2012) and the Museum of Contemporary Canadian Art (2012) in Toronto, Les Rencontres d’Arles (2011), the New Museum in New York (2010), the Museum of Contemporary Art of Rome (2010), and the Ars Electronica Festival in Linz (2010). Rafman is represented by the Zach Feuer Gallery in New York, galerie antoine ertaskiran in Montreal, Seventeen Gallery in London, and M+B Gallery in Los Angeles.

MAKE ART PUBLIC
Public space interventions on 14 backlit panels all along Monk Boulevard between Monk métro station and
St-Patrick Street. To download the map of the itinerary, click here

Podcast: Jon Rafman on Monk blvd.
Designed for visitors who wish to make their way at their own pace along Monk Blvd. and discover the works of Canadian artist Jon Rafman. The podcast consists of comments by the artist on his works and commentary by the curator on the theme. You can download the podcast on your MP3 player or your smartphone here (Price: $5).