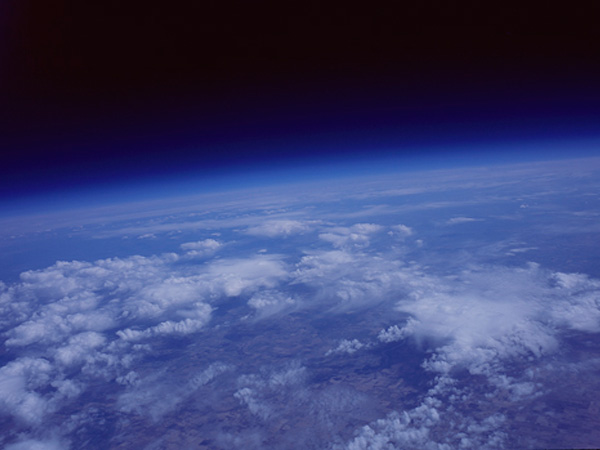 For his work High Altitude Balloon Harmless Amateur Radio Equipment (2013), Kevin Schmidt launched a large camera 35,000 metres above Earth by attaching it to a weather balloon. The timing and right conditions to release the shutter were carefully calculated so that the camera pointed away from the sun toward the horizon. The resulting 4″ x 5″ transparency photograph of the stratosphere is presented as a large projection in the gallery. The viewer standing between the projector and the image becomes part of the aerial scene as a silhouette. Playing with themes of modernity, landscape, and technology, this work suggests a new form of the sublime – one not indebted to the romantic idea of experiencing nature first-hand, but based on extending the human vision by technical means.


Born in 1972 in Ottawa, Kevin Schmidt lives and works in Vancouver and Berlin. He is the recipient of the Künstlerhaus Bethanien for the Canada Council for the Arts’ International Residencies program in Berlin in 2013. In 2008, he received the VIVA Award from the Jack and Doris Shadbolt Foundation for the Visual Arts in Vancouver. He has had solo exhibitions at the Justina M. Barnicke Gallery and the Power Plant Contemporary Art Gallery in Toronto (2011), the Musée d’art contemporain de Montréal (2011), the Catriona Jeffries Gallery in Vancouver (2010), Galerie van der Mieden in Antwerp (2009), and Galerie Barbara Thumm in Berlin (2009). His works have been in group exhibitions at the Anchorage Museum (2012), the Leonard & Bina Ellen Art Gallery in Montreal (2010), and the Vancouver Art Gallery (2009), among others. Schmidt is represented by Catriona Jeffries Gallery in Vancouver