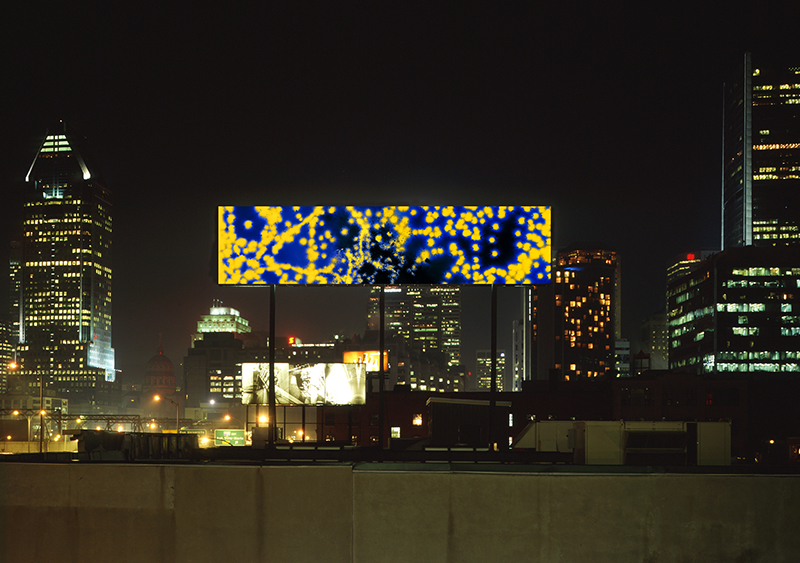 With his photogram The Blue Flyer II (2009), Michael Flomen renews the visual experiences of the pioneers of photography. Using photosensitive paper but no camera, he has captured the twinkling of fireflies at night. Their luminosity impregnates the surface of the paper, creating haphazard traces composed of phosphorescent points of light. Working as closely as possible to nature, Flomen reveals its imperceptible details and associates them with coloured tones. Located on a large scale billboard in the core of Montreal, the resulting image of an abstract and microcosmic landscape blends in with the urban landscape.

Michael Flomen was born in 1952 in Montreal, Quebec, Canada. He lives and works in Montreal.

After an initial period (the 1970s) devoted to street photography, Michael Flomen created his first abstract series with Fields, begun in 1995. Featuring trackless snow-covered surfaces, the series conveys the artist’s keen interest in keeping to an economy of means when producing images. He uses a simple photographic technique, the photogram, which does not require the use of a camera: he takes paper covered with a light-sensitive emulsion and places it in natural settings, where it comes into contact with the elements. On large blank sheets of paper, he has recorded traces of raindrops, snow, and dust, using a flash to cover the surface with negative impressions of their light signatures. These favourite elements come to life on the surface of the photographic medium, creating contrasts of light and shadow. By dispensing with the use of a lens, Flomen spares himself the tasks of framing and composing before shooting. In return, he gets random renditions rich in landscape detail. He is interested in capturing the fragile undulations of pond water, the markings of bad weather, and the luminescent pathways of fireflies in flight. Caught in the course of methodical night-time forays in his immediate surroundings, Flomen’s subjects are reduced to residual states in his images. With the Higher Ground series (2001–09), the artist began making two-tone photograms, varying his palette with blues, reds, yellows, and greens whose luminescence is enlisted in sophisticated colour experiments.