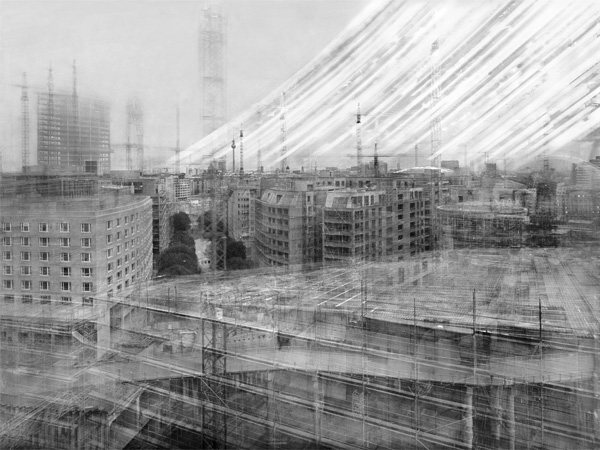 Michael Wesely has spent much of his art career working on camera techniques to allow a single exposure of up to twenty-six months. This compression of time into one image creates a series of uncanny photographs (1997-2010), consisting of ghostly buildings that melt like ice, streaks of light that reverberate across the sky, and cars whose fleeting appearance is recorded by a pinch of light. The viewer becomes aware of changes that are too slow to be noticed and of something more profound about time; as Wesely states, “The lines in the sky put our existence, us, our planet into context with the Dance of the Universe, which coexists on an entirely different time.”

Born in Munich in 1963, Michael Wesely lives in Berlin. He attended the Bayerische Staatslehranstalt für Fotografiein Munich and the Akademie der Bildenden Künste München. Wesely’s photographs have been exhibited around the world, including at the Centro Cultural São Paulo (2012), the Hamburger Kunsthalle (2011), Fotogalerie Wien in Vienna (2011), PHotoEspaña (2010), the Fahnemann Projects (2009), the Kunstmuseum in Magdeburg (2009), the Alte Nationalgalerie in Berlin (2006), the Haus der Kunst in Munich (2006), Martin-Gropius-Bau in Berlin (2005), the Hamburger Bahnhof (2005), the Seoul Museum of Art (2005), and the Museum of Modern Art (MoMA) in New York (2004). Wesely’s works are held in various international collections, including MoMA, Neue Nationalgalerie in Berlin, and Kunstmuseum Bonn.