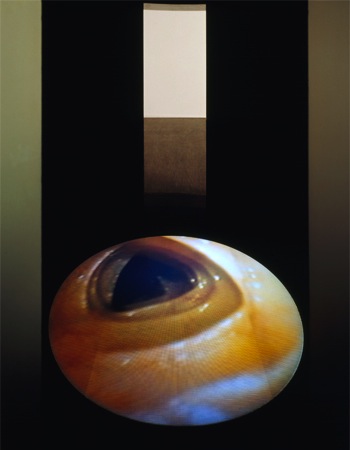 For her video installation Corps étranger (1994) Mona Hatoum used endoscopic technology to place a medical camera inside her body. The camera travels to a place that is near, but also faraway by extending human vision into the interior of the human body. Hatoum has remarked, “I wanted to give the feeling that on the one hand, the body becomes vulnerable to this scientific eye: an invasive device, probing it, turning it inside out, objectifying it. . . . On the other hand, when you’re inside the structure, in places you feel like you are on the edge of an abyss that could swallow you up.”

Born in 1952 to a Palestinian family in Beirut, Mona Hatoum lives and works in London. She has had solo exhibitions at the Joan Miró Foundation in Barcelona (2012); White Cube in London (2011); the Fundación Marcelino Botín in Santander, Spain (2010); the Kunsthalle Wien in Vienna (2009); Galerie Chantal Crousel in Paris (2008, 2010); and the Tate Gallery in London (2000), among others. Her works have been featured in numerous group exhibitions worldwide, including the Seattle Art Museum (2012), the Guggenheim Museum in Bilbao (2012), the Museum of Modern Art in New York (2010), the Venice Biennale (1995, 2005), and documenta xi Kassel (2002). In 2011, Hatoum received the Joan Miró Prize. She is represented by Alexander and Bonin in New York; Galleria Continua in San Gimignano, Beijing, and Le Moulin; Galerie Max Hetzler in Berlin; Galerie Chantal Crousel in Paris; and White Cube in London.