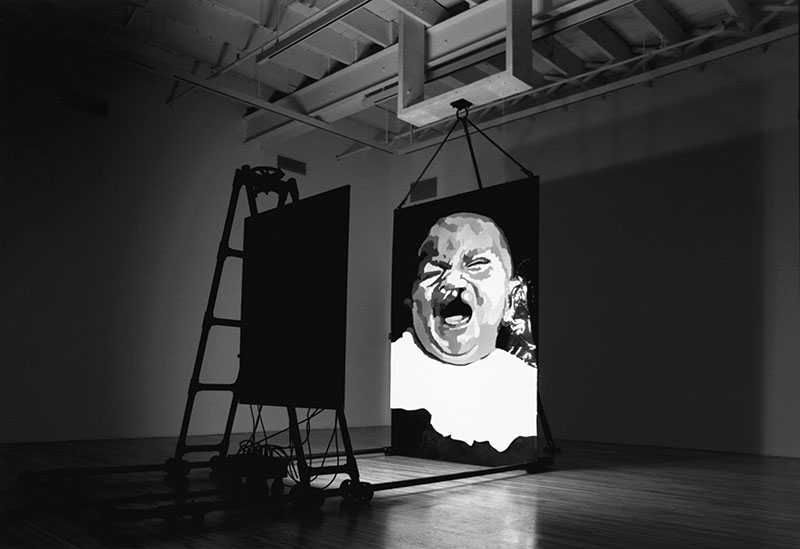 Some work resolutely departs from the canonical forms of the photographic image in order to better reveal its fundamental properties. The device that Monique Bertrand has created embodies the violence of photographic representation. Created out of 250 scraps of photographic paper of different shades, the recomposed face of a howling child—who suffers from a cleft lip—is submitted to the aggression of a panel on rails equipped with 12 powerful and scorching light bulbs. The work’s structure is like that of a vice. In order to observe the image properly, the viewer must penetrate into the interior of this device and experience the lamps’ biting heat

Monique Bertrand
Born in 1957 in Montreal, Quebec, where she still lives and works.

After embarking on the Mémoires du dompteur de puces cycle, with which she became known, Monique Bertrand’s moved toward installation. All of her work illustrates the continued existence of an unresolved conflict between the death wish (operating silently within us, feeding on a troubled lucidity) and life forces that passionately demand to be revived. This produces an uncomfortable stance that oscillates between areas of shadow and a poetry of the marvellous, and out of which emanates a melancholic gaze on the human condition. A tension between the narrative (tied to photographic iconography) and the allusive (through the visible affirmation of the other materials involved) activates a physical construction of meaning which gives rise to the fields to be grasped. A system of the sentient and the visible is at work here, one in which an aesthetics and ethics of reparation intersect. Monique Bertrand’s work has been shown in solo shows in Canada and France.