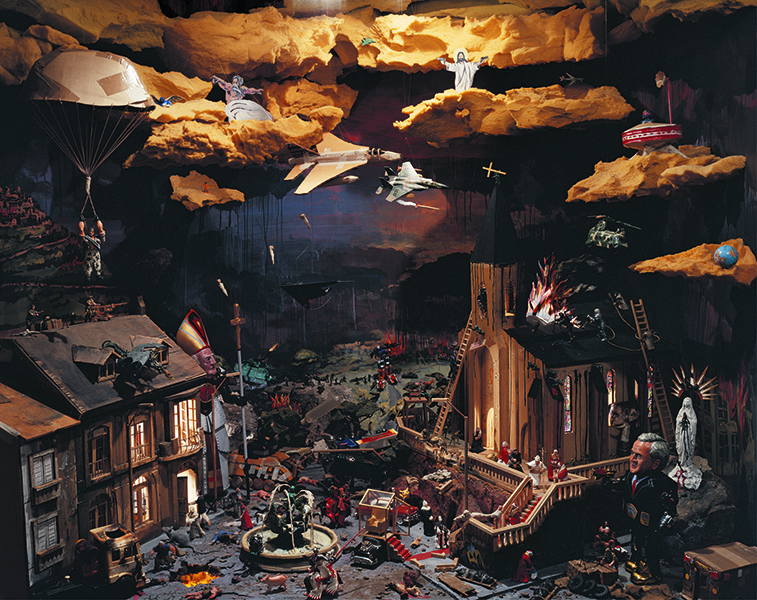 Norton Maza uses numerous artistic disciplines to confront social issues related to inequitable distribution ofwealth, the negation of individualism as a result of the social- economic conformity of globalism, uniformity of thought,and clandestine immigration. The photographs of miniature scenic models in the Avalanche du Chaos series (2007) depict the atrocities we commit in contemporary society and literally frames them within the imposing inheritance of our history.

Since the early 1990s, Norton Maza has employed discarded resources and goods to create the context for an examination of the political and economical model of Western society. From diverse castoff materials like cardboard boxes, old appliances and pieces of scrap metal, he assembles intricate architectural spaces that mimic those in which the narratives of our daily lives take place.These works trick viewers into reusing and feeling comfortable in what they would normally see as the detritus of their lives. Each of Maza’s photographic projects and installations tackles a specific issue relevant to the way of life that prevails in the social environment in which the works are exhibited. While on an artist residency in 2005 in Dordogne, France, Maza produced water-based works to comment on the abundance of freshwater streams and rivers in the area. Entitled Apnée, this work combined free-flowing water and various discarded materials assembled into multiple models of the human heart.The resulting artwork encouraged viewers to reflect on the life-giving importance of water and the difficulties faced by southern countries in which fresh water is not so easily accessible. In his 2007 piece Avalanche du chaos, Maza uses refuse that he found in Chile to fabricate models of scenes that replicate themes such as war, violence, pedophilia, and religion. Photographed and printed in large format with imposing classic frames, these images are grandiose and alluring. In Maza’s work, everyday castaway items acquire a second life and entice people to think about the side effects of the economic and political systems they live in and contribute to.