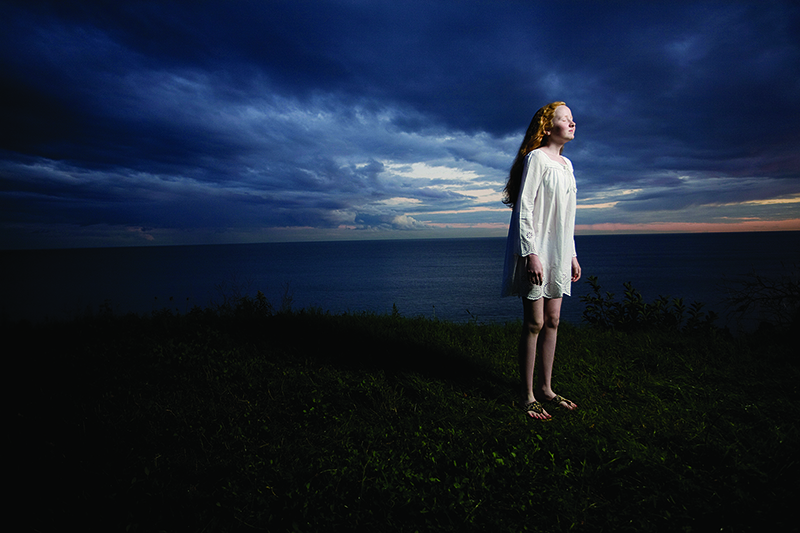 Pierre Tremblay experiments with the traditional genre of portraiture, which assumes novel dimensions in Dernière soirée de l’été – Oonagh – les Grands lacs (2008). As the viewer moves along the work’s long horizontal sequence, the familiar figure of the art- ist’s daughter is revealed. This brief moment stolen from time by the lens is incorporated into a device to create a moving image that has a spontaneity akin to live theatre, without recourse to video. Emerging from new technologies, Tremblay’s work renews the possibilities of the mobile gaze and its kinetic effects.

Pierre Tremblay was born in 1957 in Quebec City, Quebec, Canada. He lives and works in Toronto, Ontario, Canada.

Casting his gaze freely on his daily experience, Pierre Tremblay proposes new visual experiences that exist at the borders of photography and technology, paying particular attention to the classic themes of portraiture and landscape. Shown on video screens, Portraits en une phrase (2002) briefly redefines the portrait, limiting each sequence to the duration of a single sentence. Its corpus of over one hundred portraits is disseminated simultaneously without any pre-established order, offering infinite variations on the images and voices that compete in the projection area. Landscape also appears as a minimalist sequence disseminated continuously on long panels (Dernière soirée de l’été — Oonagh — les Grands lacs, 2008) or graphed onto a wall (Continuum, 2004). It renews the experience of cinematographic immersion, one in which images scroll by unceasingly on screens of different sizes. Tremblay’s film sequences and prints are both faithful and fragmentary records of the real, capturing the ordinary faces of existence. In his project Proximité (begun in 2003), he uses the banal pretext of familiar places and subjects around him to explore new modalities of the gaze. The device employed for Dernière soirée de l’été — Oonagh — les Grands lacs (2008) is freely and randomly activated by the movements of each viewer.