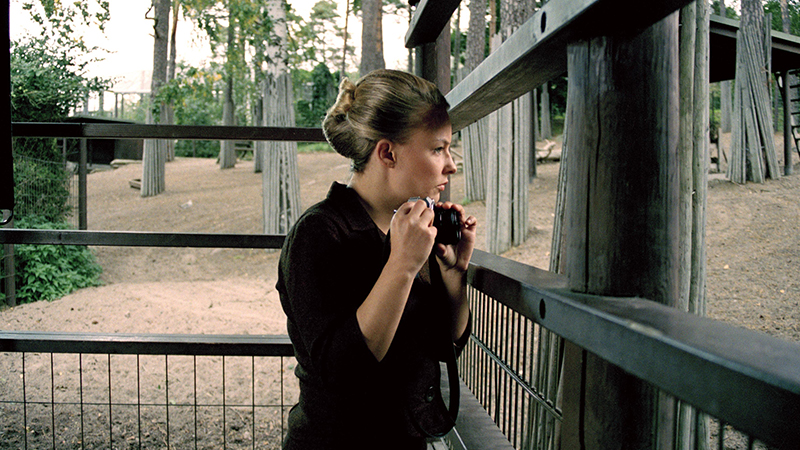 Between photography and cinema, Salla Tykkä’s most recent film, ZOO (2006), offers a remarkable interpretation of the notion of cinematic suspense. A blond woman (strangely reminiscent of Kim Novak in Hitchcock’s 1958 Vertigo) delves, camera in hand, into the strange landscape of a Finland zoo. Shadowing and reversing the photographic gaze, the camera follows the young woman’s movements in a naturally suspenseful visual and audio setting. As entrancing as they are disquieting, these sequences are intercut with images showing a particularly dangerous aquatic rugby match, further heightening the tension.

Salla Tykkä has been exhibiting video and photographic works internationally since 2000. Over these seven years, she has built up a body of work that is abundant with visual metaphors that investigate vulnerable emotional states. Her four recent film projects – Lasso (2000), Thriller (2001), Cave (2003), and ZOO (2006) – are reminiscent of short stories in that they present single, enigmatic fictional anecdotes that exist in unspecified times and spaces. Powerful and psychologically fraught, the use of fragmented representation of memory obscures the narrative line, thus inciting the viewer’s imagination. Tykkä’s latest video work, ZOO, is built around the story of a severe yet sensuallooking woman in 1950s-style clothing,who attempts to take photographs in an unidentified municipal zoo. After numerous fruitless attempts at framing her subjects, she enters a cage where she meets an unfortunate end. Disembodied moments from this story are interspersed with briefscenes from a f ierce underwater rugby match. While they do not employ dialogue or voice-overs, all of Tykkä’s videos are accompanied by influential cinematographic soundtracks. In the case of ZOO, this happens to be an original piece that is inspired by Alfred Hitchcock’s preferred composer, Bernard Hermann. The result is a dreamlike dramatic artwork that plunges viewers into an internal time/ space fiction where the desire for and fear of interaction with others, as well as control over them, merge. Although Tykkä’s films follow narrative lines, the emotional subtexts are fragmented, fitful and at times abstract; it is as though the complex psychological worlds of the characters simply cannot be transposed into traditional film language.