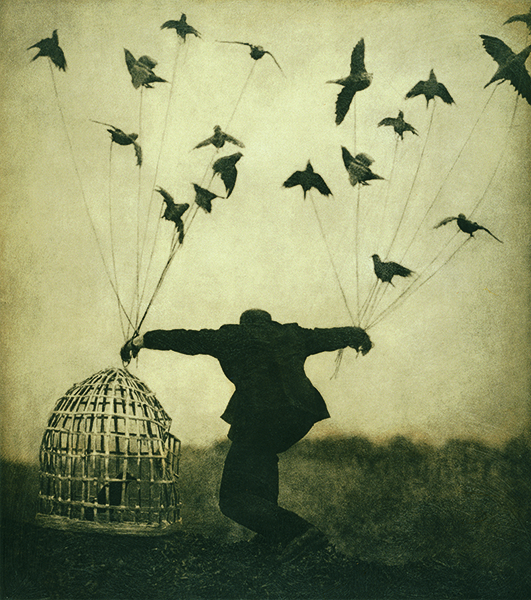 Shana and Robert ParkeHarrison: From The Architect’s Brother builds on a major exhibition of the ParkeHarrison’s work, organized by Therese Mulligan for the George Eastman House International Museum of Photography and Film. The Montreal presentation at TOHU-La Cité des arts du cirque also includes new works in photogravure by longtime collaborators, Shana and Robert ParkeHarrison, images that develop their themes of the earth in crisis and renewal. Bringing aspects of theatre, sculpture, and painting to photography, the ParkeHarrisons create a mythical world that mirrors our world, where nature is domesticated and controlled.

The ParkeHarrisons conceive their work in series. A compelling feature of their imagery is the performance of central character, an Everyman, played by Robert ParkeHarrison. As Mulligan writes:

“From the series Exhausted Globe to Passage, the ParkeHarrisons create an overarching narrative of epic proportions. It is a story of a fall and rebirth that has long resounded throughout literature and art as an instructive example of ethical conduct. Potent devices, including irony, humor, and symbolism, sharpen the rhetoric of this narrative approach, combining to produce compelling images that confront the state—and possible fate—of our world.”

Robert ParkeHarrison uses the paper negative and collage to construct stories of healing and restoration amid landscapes scarred by technology and overuse. He was born in Missouri in 1968 and his wife Shana was born in Oklahoma in 1964. After many years of an evolving collaboration, the ParkeHarrisons began exhibiting their work as co-creators in 2001. Their first one-person museum exhibition, The Architect’s Brother, is currently on tour, and a monograph has been published to accompany the exhibition. Their work has been shown across the United States and Europe and is represented in numerous collections. They live in Massachusetts.