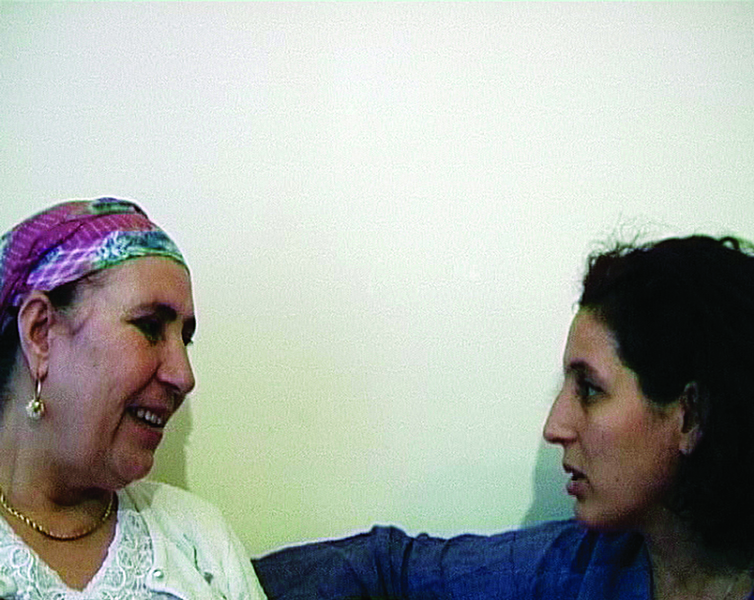 Zineb Sedira’s video triptych Mother Tongue (2002) attests to the cultural transitions experienced by the artist in her peregrinations between Algeria, France, and England. The piece’s three sequences evoke stories exchanged by the artist, her daughter, and her mother. In the absence of a common language, dialogue becomes impossible and the lines of communication between the generations wear thin. Intimately bound up with the story of her life, Sedira’s work reveals the complexity and mutual comprehension of geographical and cul- tural distances.

Zineb Sedira was born in 1963 in Paris, France.
She lives and works in London, United Kingdom. www.zinebsedira.com

Through her use of video and photography, Zineb Sedira develops narratives that are autobiographical or intimately bound up with her personal history. Her work on migration and on memory as a component of identity evokes the gaps in the artist’s own transitions among cultures in Algeria, France, and England, as well as the displacements experienced by three generations of her family. Her early photographs mix the icons and rituals of Western and Eastern cultures (Self-Portrait or the Trinity, 2000). Testimonies recorded within the family microcosm (Mother Tongue, 2002) or suggested via deserted seaside locations (Framing the View, 2006) draw upon both personal and collective registers. Starting in 2006, Sedira began to develop more anonymous and universal narratives featuring solitary figures, ghostly masses of shipwrecks on the coast of Mauritania (The Death of a Journey, 2008), and coastal outlines. Presented alternately in single stills and in panoramas, the Mediterranean landscape emerges as an omnipresent figure in which the sea embodies the transition between Algeria and France (Middlesea, 2008). Sedira’s portraits, self-portraits, and empty landscapes, envisaged in the space of a geographical and allegorical breach, hint at the concepts of nomadism and exile. Her work moves, therefore, amid the complexities of geographical and cultural distances and the understanding of both.

Correction to the program :
The work is not presented for the first time in Canada.